Plants arrange their leaves in patterns. Scientists call these arrangements phyllotaxy. Looking at a variety of such arrangements one wonders at nature’s designs. But could there be some compulsion on plants to grow the way they do?

470 million years ago, plants first appeared on land. They spread quickly to cover vast areas. The ensuing drop in CO2 allegedly cooled the earth so much so that an Ice Age followed. 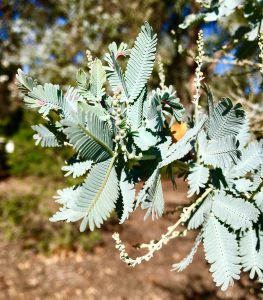 Their landward march began along the coastline. They kept moving up the continents as much as water allowed them to or as much water they could take along with them. We still have deserts in many interior land areas. It is quite clear then that water bearing land areas formed the real estate for plants to encroach upon. That real estate was much scarce early in the earth’s history.

Plants are good at harvesting solar energy. They have this urge to grab every photon falling near the earth’s surface. To be able to achieve that they need to install their version of PV cells – the leaves – more and more. And in patterns that allow sunlight to fall on each one of them. Necessity is the mother of invention is an old saying and plants knew it millions of years ago. So they invented phyllotaxy and grew taller.

Unlike animals, plants lack the ability to move which is a big handicap in self-defence. Their defence weaponry is limited to use of spines, hairs and visual and olfactory signals. Even these tools need to perform the delicate balancing act of repelling herbivorous animals yet attracting pollinators. And then there is the grand manipulator – human being. In spite of all this, the land is still mainly green. This is no mean feat. Plants didn’t just survive. They have had phenomenal growth. All the leaves’ surfaces together can cover 100 continents of the size of Australia! Such is the expanse of what is called the phyllosphere. Naturally they couldn’t have achieved this without looking upwards in the Z-direction for space.

What do you do when you don’t have much real estate? You build high-rises.